I arrive at Milano Malpensa airport excited about my upcoming culinary exploits.  I’m traveling to Italy again on another culinary adventure.  In addition to my giddiness, I’m tired – extremely tired.  My travels began at 3 am yesterday. As a trudge towards the train station,  the sign with my name shines like a beacon of light. Was it providence that the car and driver were incorrectly scheduled for my arrival instead of my departure?  I’m not thinking too hard about it.  A private sedan instead two train rides after a 14+ hour flight?  Are you kidding?  I’ll take it.

I’m attending a week-long intensive pasta course in Northern Italy through Manuelina Culinary at the well-regarded CAST Alimente culinary school in Brescia.  I’m unsure what to expect and heading in rather blind.  I haven’t had much time for research on the program.  I enquired to Manuelina last year in 2015, but due to an email glitch on their end, it was some months later until the school finally responded.  Due to the difficulties, the school generously offered me a discount for my trouble.  The 2016 program coincided nicely with a slow time at work and the availability of a round trip flight using points solidified my resolve,  so I stopped considering and sent the deposit.

Fast forward six months and I’ve arrived in Italy.  We’re a motley crew of students.  I’m the only American – the “food enthusiast” in the group (a nice way of saying that I’m doing nothing with my culinary education).  We have a 19-year old Latvian just out of Cordon Bleu, a Canadian who’s considering opening a shop, a quiet yet determined Czech looking for a career change, and two vivacious Australians that remind me of Patsy and Edina from Ab Fab, although I’ve never actually watched the show.

This isn’t my first attempt at pasta making.  We kneaded and cut pasta for a day or two during culinary school, but that’s a blur now, and I also had an impromptu lesson in 2013 during gelato school.  I’ve made pasta a handful of times at home, but  I’ve still kept a dream of learning to make pasta “the right way”  from some Italian nona  – and the Life & Thyme pasta video makes  it so sexy (even with a burly tattooed chef),  I wanted more.  So here I am.

The school is large, well-equipped, professional, state of the art, and sparkling clean.  This isn’t any nona’s kitchen.  In addition to our group, the student body numbers around 350 taking various classes at the school.  There’s a cafeteria (with an espresso bar, of course), lockers and a well-stocked store on property.

On our first day, Maestro Chef Walter walks us through making basic egg pasta and it’s plethora of shapes and sizes as well as the steps to authentic lasagna (béchamel, no ricotta, folks) from the Bolognese sauce, through cooking the pasta sheets,  to the last sprinkling flourish of parmesan.

It’s been a full day.  I try my best to absorb it all. 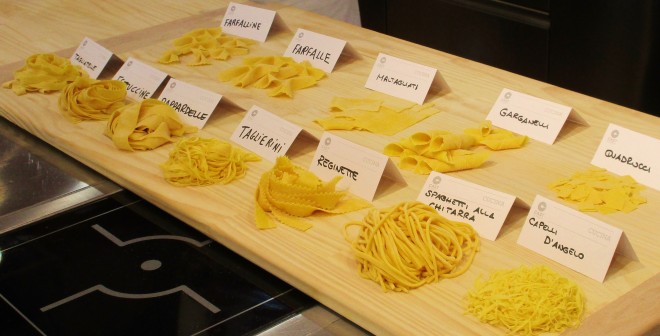 2 thoughts on “Pasta with Manuelina Culinary”