I was horrified to learn that I gained eight pounds in two weeks. Perhaps it had something to do with all of the gelato “research”.

Discoveries included that the best pistachio (and I tested scoopfuls) was from Stefino Bio in Bologna – the sister gelateria of Stefino on Galleria. The ‘Bio’ references their commitment to using only organic ingredients and their rice milk options.  This pistachio was definitely made with real milk.  In my very broken Italian I made it clear what I was looking for – “Si latte, no riso.”

The other flavor that stayed with my taste buds was Cioccolato all’Arancio (Chocolate Orange) from Gelatauro, also in Bologna.  Dark chocolate with candied orange peel from their own Calabrese citrus groves and hunks of sponge cake.  Rich and dark chocolate with just a hint of orange. I may be trying to duplicate this one for July 4th this year. 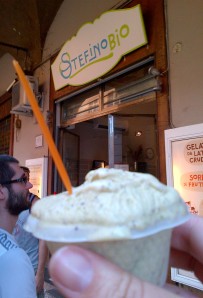 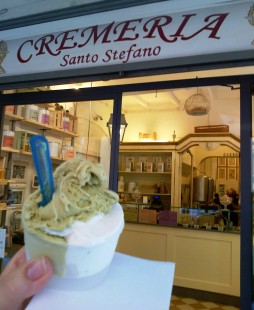 Known for their own flavor combinations- this is Ludovico and Eduardo. 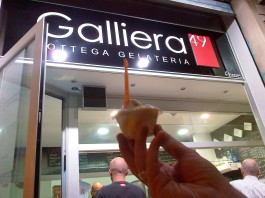