Bacon, Gruyère cheese, and  crispy, light choux pastry. I fell in love with gougères in culinary school – I’ve gilded the lily with the addition of bacon.  Appetizers as glamorous as they are delicious. 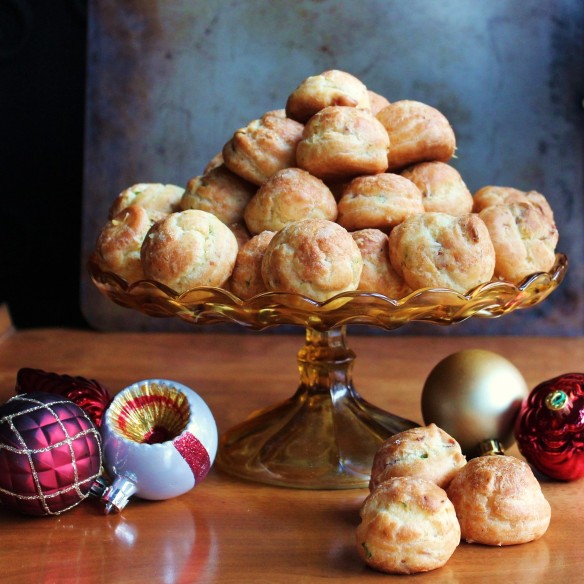 “It is better to fail in originality than to succeed in imitation.” – Herman Melville

You may think of book clubs as a bunch of shy, mild-mannered, nerdy types – and that may be true…until someone starts stealing our schtick, then we get all gangster.

If you’ve been following this blog with any regularity, you might remember that I started a book club in January, meeting at a local downtown bar & restaurant. It’s been my pet project, and reasonably successful.

A few months ago, I noticed someone else launched a similarly-named book club that happened to meet just 325 feet from our location (coincidence?). While, at the time, I did feel slightly encroached upon, I also thought, “That’s okay. There’s plenty of readers to go around. Good luck to them.” We were meeting monthly on the second Tuesday; the newbies were meeting weekly on Wednesdays. There was enough dissimilarity between our two groups that new members wanting to join our club wouldn’t (I hoped) be confused.

Today I noticed that, starting next month, this copy-cat usurper club will start meeting monthly on the second Tuesday – at the exact same time as our group. So, not only did they copy our name and steal our location, now they are appropriating our dates and times, too. I’m quite surprised they haven’t pilfered our reading list as well. WTF?!

I’ve heard the idiom, “Imitation is the sincerest form of flattery,” a million times, but this is downright thievery. I am not flattered. I no longer wish them luck – I wish their ersatz book club a swift and immediate demise. In fact, next month, I’m suggesting a pre-book club brawl to my group. I’m confident we could take them down.

Speaking of imitation and idea-pilfering, the following is not my own, but a riff on a ubiquitous gougères recipe. Guilty as charged.

These are best served piping hot from the oven. If needed, reheat at 350˚ until warm and crisp.