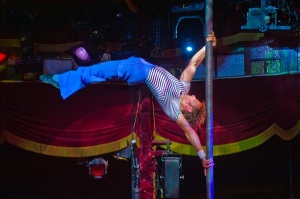 I have a new contact in my cell phone.  His name is listed as “Jaques the French man!” He added it himself.    He wants me to come to his apartment and cook him dinner.  He says he’ll make a tarte de pomme for dessert.  Really, though, he wants me for dessert.  He’s not shy about telling me what he wants.

Jaques is a French acrobat.

We “meet” during his performance last night.  My friend, P, was the first to notice him noticing me.  Each time he walks past our table, each time he takes the stage, he steals glances at me.  I don’t notice at first – until P points it out, and points it out again, and again.  He’s waiting for me after the show, inviting us out for drinks.

We talk, we laugh, we translate.  He’s muscular and flexible (and don’t forget French)  – and (he finally confesses)… he’s married.  Less than ideal. Next.

His friend is right on his tail – a pretty-boy Asian with long, frosted hair.  Handing P my card, he tells her I should call him “if I want someone cool and available” (in contrast to my French acrobat).  His card reads “Style Editor and Social Ambassador.”  In actuality, he’s a bartender at the dinner cabaret where we met Jaques.  Again, less than ideal.

What the heck has been going on these last few weeks?  I seem to be attracting the men – a lot of them.  My pheromones must be high – well, at least my haven’t-been-touched-in-almost-a-year pheromones, that is.  Unfortunately, I seem to be stuck attracting those who are, as Irish Katie says, “less than ideal”.

These LTI’s  gives me a bit of hope, though.  For every ten “less than ideals,” there’s got to be one potential worth dating, right?  This month, there’s been married, clueless, crushed by divorce, married acrobat and self-ascribed “social ambassador”.  What’s next?  Who’s next?

2 thoughts on “Less than Ideal”