It’s Friday night and she has no plans. She received a text from him this afternoon, but she didn’t take the bait. She feels he’s always waiting for her to make the first move, as if he’s unsure, ambivalent. It seems he ONLY texts her on Friday afternoons, as if she doesn’t exist for him during the week, and he only remembers her after he hasn’t solidified other, better plans.

“I am not an afterthought,” she thinks to herself.

Over two decades ago, and on the recommendation of her sister, she read a popular dating book called, “The Rules.” Her best friend at the time gave her a lot of grief for obeying some of the book’s suggestions. A lot of grief. While some of the rules were silly and outdated, two concepts spoke to her – First, believe that you are unique and special and, second, don’t waste time with men who don’t treat you like you’re unique and special. One of the specific rules instructed readers not to accept a Saturday date after Wednesday (when she followed this rule, it drove her friend crazy) – in other words, don’t be an afterthought.

Sure, she delights as much as the next girl in occasional spontaneity, but also believes that if a man is truly interested, he should think about her at some point during the week. She thought about him. Why must he wait until Friday to ask her out? After reading this article in the Huffington Post, she realizes her ideas aren’t so old-fashioned after all. Consistent last minute requests to hang out make us all feel like we are Plan B, even in 2017. And if we continuously make ourselves available, we are encouraging this type of behavior.

The truth is that she’d love to hang out with him this weekend. But she believes she’s more than a Plan B. She hopes he’ll realize this, too. Meanwhile, while he’s figuring it out, she’ll play in her kitchen:

This sweet and spicy(like a good date!)jam makes a quick appetizer when spooned over cream cheese and served with crackers or toast. It’s also tasty as a glaze on shrimp, chicken or salmon…or slathered on a toasted bagel and schmear.

I developed this recipe to use up some of the dried chilies in my pantry. I used a combination of Arbol, Guajillo and Puya chilies, but you can mix or match depending on what’s available. 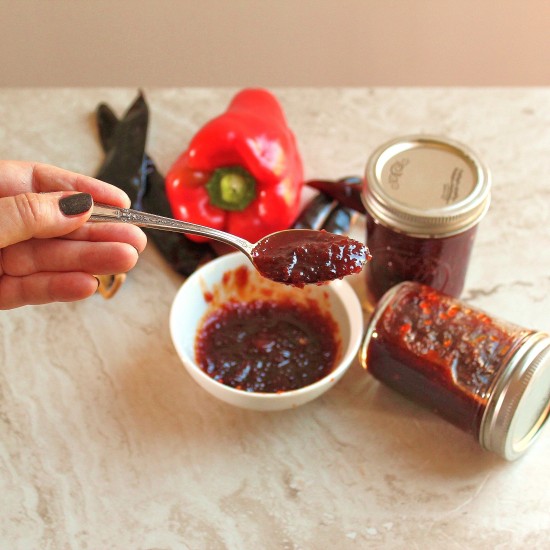